Get instant property alerts for www.the360realty.com

Get the MoveTo App

The land that became Forsyth County was originally named Wachovia by the Moravians who purchased and settled it in 1753; the name was the Latin form of "Wachau," the Austrian ancestral estate of Moravian Church patron Count Nicholas Ludwig von Zinzendorf. Bethabara ("house of passage") was the first community established in the new land, although Salem (founded in 1766) emerged as the commercial hub of the Moravians' religious haven. Many elements of seventeenth- and eighteenth-century daily life in the town have been preserved in the Old Salem Historic District, which maintains more than 50 restored buildings and features a blacksmith, gunsmith, cobbler, and carpenter in period dress.

From its humble origins, Winston-Salem had emerged by the end of the twentieth century as Forsyth County's economic engine and the fifth-largest city in North Carolina (the county as a whole, with an estimated 321,000 residents in 2004, ranked fourth in population in the state). The city briefly, in 1920, held the title of North Carolina's largest city. In 1875 Richard Joshua Reynolds established his tobacco business in Winston, and the company's growth into one of the nation's largest corporations spurred the development of both the city and Forsyth County. In addition to R. J. Reynolds Corporation, other major businesses with Forsyth County roots include Krispy Kreme Doughnuts and the Wachovia Corporation (although the latter's corporate headquarters were relocated to Charlotte following its 2001 merger with First Union). Important agricultural and industrial products include tobacco, corn, soybeans, furniture, textiles, tractors, and optical fiber.

Winston-Salem, thanks in large part to the philanthropic pursuits of the Reynolds family and the local business community, is also regarded as a major cultural and artistic center in North Carolina. The Reynolds home, known as the Reynolda House, contains a major collection of American art. The city is home to the nation's first local arts council (the Arts Council of Winston-Salem and Forsyth County, established in 1949) as well as the first state-supported arts conservatory (the North Carolina School of the Arts, which opened in 1965). Salem College (1772), Wake Forest University (1834), and Winston-Salem State University (1897) are important academic institutes in the county. Celebrated Forsyth County cultural events include the Dixie Classic Fair, the National Black Theatre Festival (both in Winston-Salem), and the Christmas-themed Festival of Lights at Tanglewood Park (in Clemmons).

Welcome to this 4 bedroom, 3 bathroom home in Old Towne Village! Upon entry, the main level greets you with gorgeous wainscoting, crown molding, a fireplace and hardwood ...

Great opportunity to obtain two properties for one price! Two lots being sold as a package deal. Package includes MLS 1095753.

The features of the Mayflower III will make your dreams come true! This new home by Lennar offers 4 bedrooms, 3 baths, Loft and Screen Porch. Easy access to Winston Salem...

Welcome home to Grandview Place! If you are looking for an updated home in a picturesque neighborhood with the ease and convience to major highways, this is a must-see! T...

Great investment property! 3 bed 1 bath brick home located in a good neighborhood in the heart of Winston Salem. House has an unfinished basement with endless possibilit...

Quintessential bungalow is perched overlooking Washington Park in one of the nicest spots in this historic neighborhood. The charming garden features stone walls, cedar t...

Homesite #73- Ready to have your dream kitchen? This kitchen is fit for a chef with its granite countertops, stainless steel appliances, and large pantry. A gorgeous two...

Homesite #70- Beautiful Victor floor plan. Greeted upon entry with a beautiful formal dining room followed by a great organizational space and laundry room that will make...

Homesite#74- Fabulous one-story Carson plan! This modern ranch has all the room you've been looking for! As you enter you are greeted with beautiful luxury vinyl plank fl...

Homesite #75- You will fall in love with this Nanatahala plan! You are greeted with a gorgeous two-story entryway that really accentuates this open floor plan. Such a spa...

Welcome home to this lovely Lancaster floor plan on Homesite 17! As you enter your home, you’ll love the office space nicely adorned with French doors. Head down the hall... 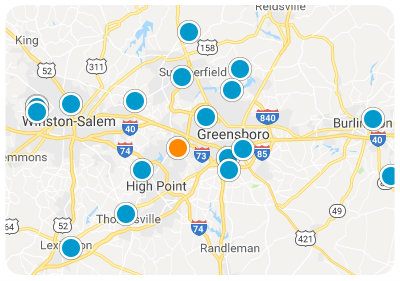